YAY! we have real family photos!

So the day before Jeff and I ran our marathons, we took the kids, plus our nephew Alex to Alki Beach for a photo shoot with one of our friends from high school and her husband (they drove all the way over from Moses Lake). It was really fun and they got some really great, truly Seattle photos of us and the kids! You can check out their blog/our post here!
1 comment:

The LONG and winding road

So in order to get home for the marathons we had to drive - a lot of times for us, it's just easier to do that and have our car, and all the stuff we can shove in it while we're at home than to fly. We'll be doing this trip again in August. It took us two days to get out there and since we were lucky enough to be able to haul the boat home, three days to get back. Here are some highlights of the trip. 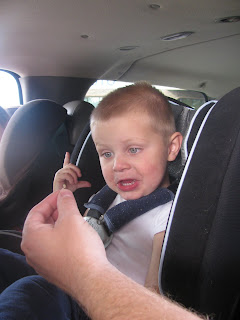 Before we even left Colorado Springs, Jeff grabbed a booger from Kale then showed it to him - this was his reaction. This kid is so expressive it cracks us up! 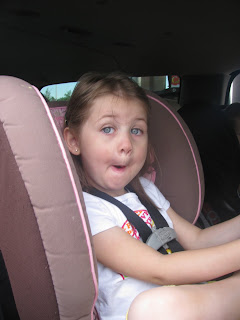 Haley doing her impression of Kale. 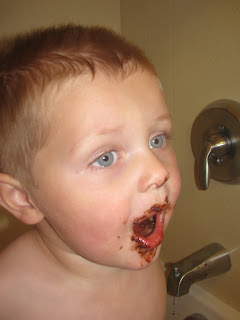 The Hampton Inn we stayed at in Tremonton, UT on the way home was so kind as to provide chocolate chip cookies upon check in. Kale looks like the kid who took 25 of them when, in reality it was just one. He liked his cookie. 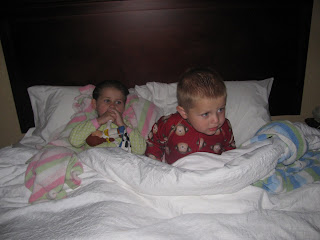 The kids ready for bed in the hotel. This isn't even close to how they slept though. Haley cuddled with me in this bed while Kale and Jeff hung out in the other bed - Kale only fell out once. 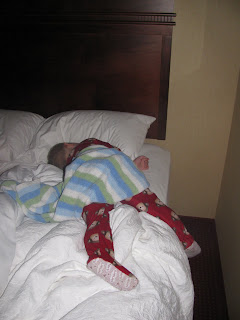 Because this is how he insisted on sleeping. We can't be blamed if he won't let us move him to a safer position. 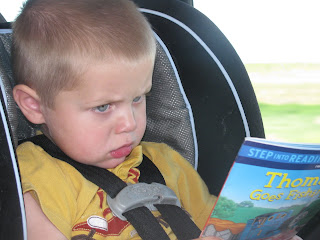 They both loved reading books, this was Kale's favorite! He's pretty into it, even though he hasn't cracked it open yet.
One of the highlights of the trip for me was going to visit my grandma in her awesome new digs - seriously, I want to move in too. She took us on a tour of the place, and then invited us to stay for lunch - she was the hit, with all her friends coming by to ogle at the kids. 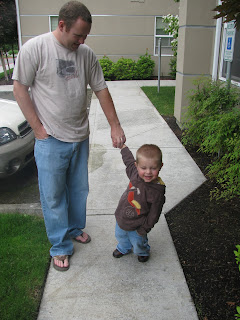 Kale and Daddy taking a walk around the place. 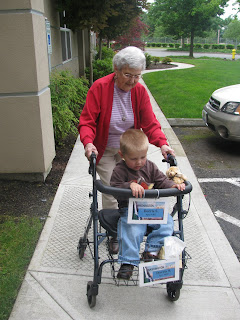 Then he got tired and hitched a ride with Great Grandma on her kart. Downhill wasn't bad (thank God she has breaks on that thing), but going up was a challenge. 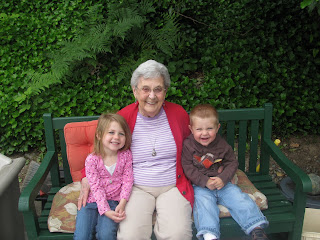 She took us to see her garden and I think this is by far the best picture of the entire vacation. It's rare that we get both kids looking at the camera and smiling! I can't wait to print a couple of these! 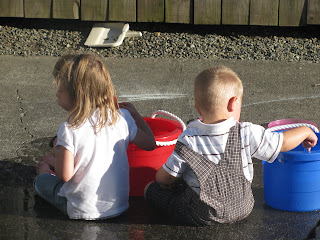 Grandma Debbie filled their buckets with water one evening when it was warmer and they were able to just play. These kids are such water babies, this is where they're happiest, just a bucket and a way to play with the water. 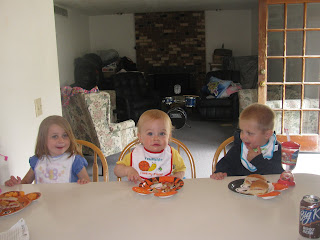 This is Luca, Jeff's best friend's son. Luca and Kale don't know it yet, but they're predetermined to be BFFs so we get them together whenever we can. And if things don't work out with Caden or Yanni, Haley's welcome to go cougar on this guy. We just hope that someday Luca has a sister - then we can officially consider Sonny and Krystal family. Also, please note that my kids are wearing bibs - they demanded because Luca got to wear one, they're just eating PBJs.
No comments:

It's no big secret that Jeff and I have been working really hard at being healthy and getting into better shape. Last year for our Christmas letter I threw out there that my next goal was that I wanted to run a half marathon. Ours being a marriage of "Anything you can do, I can do better", Jeff upped the ante and decided to run the full (that's 26.2 miles) - I folded and stayed with the half. We chose to run the Seattle Rock n Roll Marathon and Half Marathon, because we thought it would be nice to have family there to support us, and honestly, we knew it would be easier to run at sea level (and why not get every advantage we can get). June 26th we did it! Let me say this again: WE. DID. IT. I'm proud to say that we both finished, and with great times to boot!
I went into this saying that if I finished that was great, then it became, "well, I'd like to do it in 3 hours", then it was "I think I can run the whole thing". I ended up running all 13.1 miles, and finished with a time of 2:32:15. 2 minutes and fifteen seconds away from two and a half hours. The competitor that I am, I know that I can do it in under two and a half and thus becomes my next goal (sometimes being so darn goal orientated can be such a burden - HA!).
The race was absolutely a ball. I got to run on places that people are only able to drive (like the commuter lanes of I-5), along parts of Lake Washington that I've never seen before and all kinds of other great places. Jeff got to run on the I-90 floating bridge and on the Alaskan Way Viaduct! The weather was perfect and the entire experience was more than I hoped for. The best part? Seeing Molly, my dad and Ben as I came down the finish line and their high 5's! Witnesses that I finished! Nobody tells you how emotional it is to finish something like this, I hugged my sister in the meet up place and cried like a baby! I did it! And, since I believe that no blog is complete without pictures, here ya go! If you want to see pictures of me actually running the race go here (there's one of me at the finish where I look like I'm going to die), Jeff running the race - go here (his are pretty cool). 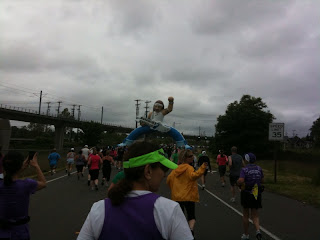 At the start line we got to run underneath the Brooks Rocker's legs. I can die now. 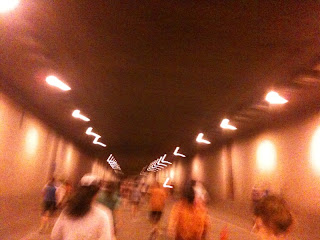 Yes, I realize it's blurry, but the lighting was crud, and did I mention I WAS RUNNING?! This is in one of the commuter tunnels. 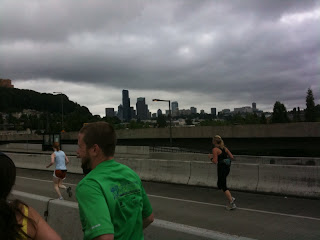 My first glimpse of the city! The end is near! 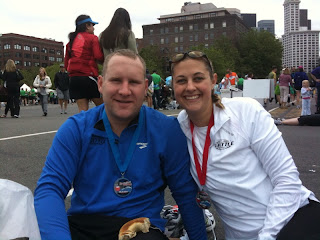 After Jeff and I finished! I'd been done for a bit, but I gave him about 5 minutes to stretch and sit before I made him take this picture. He did his race in 4:30:14! 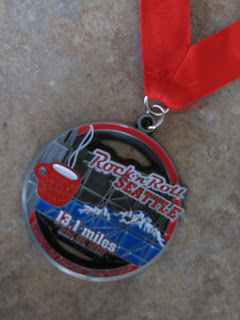 My medal! I love that there is a coffee cup on it, and that it looks like the Pike Place sign. 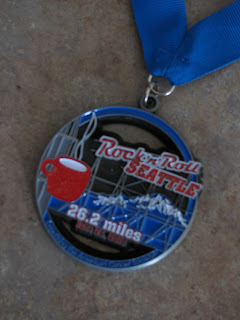 Jeff's medal! 26.2 miles! I still can't wrap my head around running that distance!

This is what I'm talking about