My favorite thing about you is:
You're waterbabies! 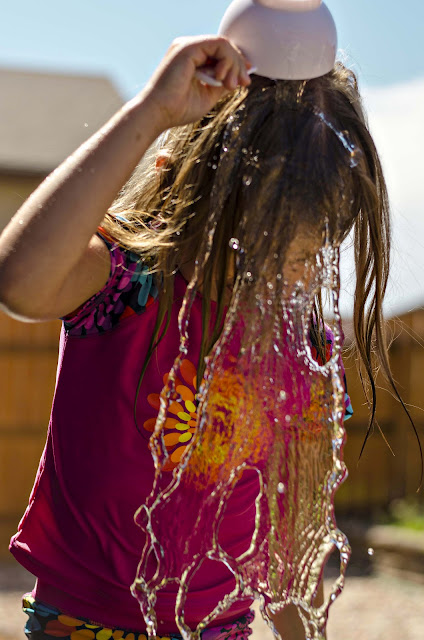 Yup, you kiddos love the water.  So you two know, we're blessed to belong to a really great gym that has a fantastic outdoor pool.  We spend about three days a week there and despite my efforts at a 50SPF liquid sweater (that you complain makes you look like a snowflake), your hair is turning blonde and your skin is getting a few shades darker.  I've taken to only allowing a couple of toys, but you guys are happy with something to pick up off the bottom of the pool and your goggles to find it.  We pack a lunch and spend the greater part of the afternoon there before we head home from nap.  I think it's this routine that makes the summer months my favorite.  Both of you get compliments on your swimming abilities, and I think by next summer you'll both have run of the whole pool (including the tall water slides), not just the shallower kiddie area.  I've never pulled out a stopwatch, but I'm pretty sure you spend more time under the water than above.  I love it.  I was the same way growing up with your Aunties Molly and Amanda, and Uncle Aaron.

This week we've come home from the pool to take naps (sometimes all three of us), and when you wake up, you head out to your "hot tubs" (three 17 gallon tubs we bought for Kale's birthday party last year).  We fill them in the morning, and let them heat up while we're at the pool, and they're so toasty by the afternoon.  Perfect for you to climb in and out of 100 times, and even better for filling up your squirt guns a million times.

I love this.  L.O.V.E.  I remember water being such a huge part of growing up and swimming was (is) one of my most favorite things in the world.  Between your dad and I we can count swimming, diving, water polo, water skiing, surfing, wake boarding, and SCUBA diving as hobbies.  We were both lifeguards at the local pool.  It's the only sport you can play that can save your life.  When you were both tiny babies we took you for swimming classes and you just loved them - easily the happiest and most comfortable babies in the water.  In fact, even before that, we used to laugh that if you didn't like the water, well, in this family, we'd just have to send you back from whence you came.

Mostly?  It's because of the boat.  Neither of you have spent much time on it, but this weekend, that's about to change.  Drastically.  And I'm so excited for you!  Your dad and I both grew up on a boat - I still think my boat driving skills are quite possibly what hooked your dad (many) years ago.  It's just part of our family.  Bumpa told me a long time ago, that the great part of having a boat is that your kids want to hang out with you - you're the great place to be and you get to meet all of your kids friends (for better or worse).  I hope when you're 15 and moody and hormonal, we can take you and a few friends out on the boat and hang out as a family (I might even let you pick the music).  Lastly:  if you find your self a boy or girl someday who can handle themselves on the water, keep 'em!  Boat people are just good people.

Want to check out some other super great Project 52 eye candy?
. Styleberry . Wicked Kate . Adventures in Mommyhood .  Lucas & Mahina . Heather Marie Portraits . Something Insightful .
Can I link you too?  Leave me a comment.

My favorite thing about you is:
That you're a good friend. 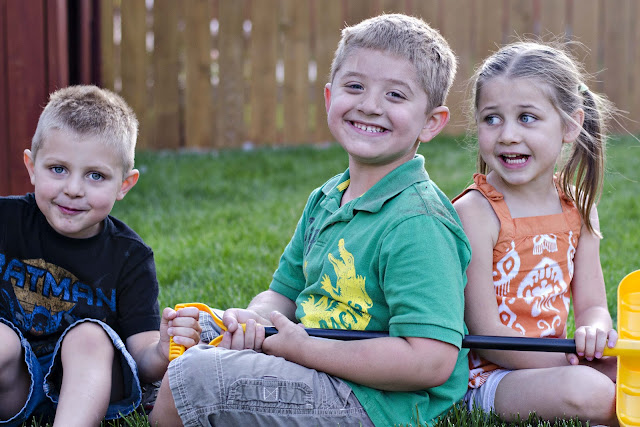 This week the whole family says goodbye to our BFF family.  I guess, it's really a "See ya later" type deal (or at least it better be), but over the last 4 years we've grown so close to these guys that it's a tough goodbye.  Lets start at the beginning:  5 and a half years ago, we lived in Montana and Jeff worked for a (pretty tight knit squadron) called Deuce.  Haley was born.  This family showed up at our door step with the best spaghetti ever.  Seriously guys, E.V.E.R.  Turns out she was pregnant too and due about 5 months later.  If I hadn't been in my newborn baby haze (and could have seen to the future), I'd have invited them in to share the dinner and started our friendship right then and there.  But I was dumb, and if you've ever been in that newborn haze, then you know where my head was at.  Fast forward a year and a half (4 years ago, if you're doing the math) and we all end up just two houses apart on the same side of the street here in Colorado (again, if you're doing the math, that's stumbling distance, folks).

4 years of amazing friendship, and many dinners/desserts/drinks later, these are definitely some of the closest friends we've ever had.  We've been through some serious life events together, including recently gaining another member of the club, 2 years of preschool pick-ups/drop offs, a deployment, TDY's, just so much.  It's going to be tough not having them down the street.  They're our go to fire-pit and drinks friends.  Thank God for Facebook (and texting).

Beyond the adults, the kids are hardly going to know what to do with out their BFF down the street.  Whenever we pull into the driveway, they're looking to see if he's out in his.  They're worried whether he'll like his new home, and new school and make new friends (he'll be fine).  This is the first time that they're really going to realize how it feels to miss someone in their life.  I'm proud that they care so much about their friends.  They're loyal, and empathetic, and as a parent, I can't ask for much more than that in their friendships.  Additionally, they really pick some great kids to be friends with.  I can't complain because many times, as a result of their friendships, I gain a new mom friend too.  How great is that?!

Anyway, guys, we'll miss you.  So much.  We'll come visit, and hopefully we'll see you down the street again in another 4 years or so.  And because I'm in tears now, and you're due to my house for one last dessert in about 30 minutes, I'm going to go get my *stuff* together.

My favorite thing about you is:
Your Curiosity. 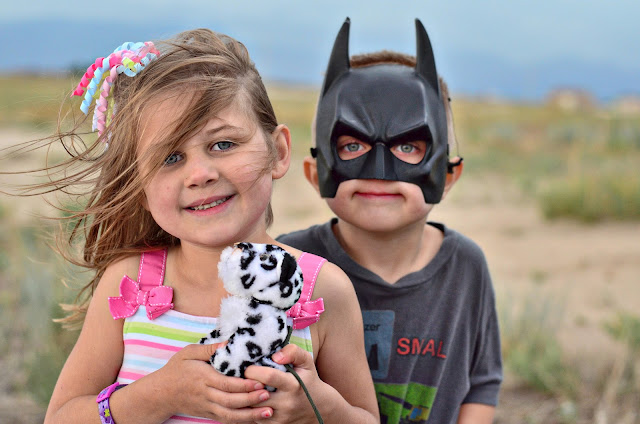 Why?  WHY?  WHY?! Yes, it's the age.  I get it.  If you ask your father, he'll tell you that you get it from me. "Why can't you just agree to something, you always have to question it." he tells me.  A lot.  Because I want to understand.  And you guys do too.  I doubt he'll ever get a break from the questioning.  But it makes us smarter, and we don't have to walk around pretending we understand when we really don't.  There's a lesson there.  Make sure you learn it.

On this specific day we took the kids on their first (memorable) geo-caching adventure.  We stayed very local and were pretty poor at it -  found one of the five(?) we tried.  One thing that's not my favorite?  Your lack of patience.  Again, I know where it comes from.  I was cold and tired too, and I wasn't even 4 or 5 years old.  With each of the caches there was a little background story.  You had so many questions about the story (did you listen?  I don't have any more information that what you have), where was it going to be (I don't know, that's the whole point of this exercise...), what would be there (we're going to just have to find it and figure that out), why do people do this (good question)?  But it was a great family adventure.  Till our (also curious?) new neighbors pulled up beside us on the side of the road and wanted to make sure we were okay as we're wandering around obviously searching for something.  "Yup, we're fine, just geo-caching!"  "What?" Then confused looks as they drove away.  But, and this is a big BUT, it was a great family adventure.  We spent time together as a family and did something new.  We'll try it again, but will likely have to update our equipment first.  And also bring sweatshirts.

This is a picture of Haley holding one of the permanent fixtures of the one cache we found.  Seal (the snow leopard).  Haley traded a pencil with a cupcake eraser for a bottle of bubbles, and Batman traded a sports pencil for a McDonald's toy.  What?  Don't you wear a mask when you're geo-caching?  Well why the heck not?  I'm just curious. 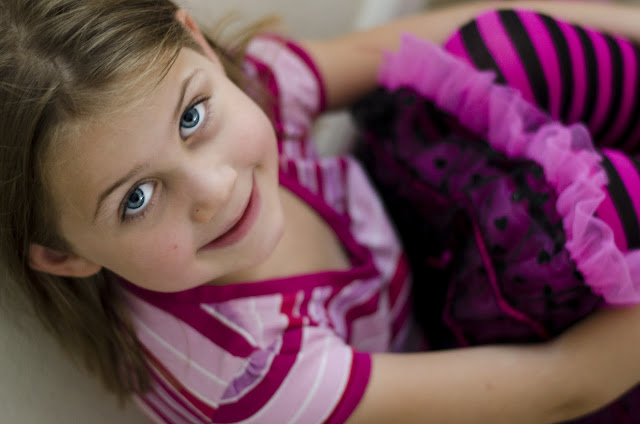 My favorite thing about you is:
Your thankful heart. 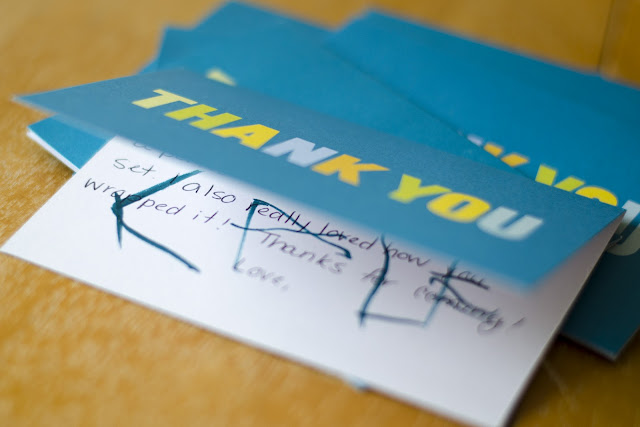 I'm thankful for lots of things.  Top of my list is my family.  One of the smaller things?  That Kale can write his name.  I believe that when kids have birthdays they write thank you notes... it's not some new parenting theory, in fact, I'd wager that most of my friends have their kids do the same thing.  I believe that if they're loved enough to receive a present, then they should have some part in the thank you.  We have a thank you note progression around these parts:  Birthdays one through three, I'll write the note, they must provide some kind of artwork.  On their fourth birthday they need to sign their name.  Five, it's time to write the note yourself - I'll write it first, they copy the letters (very simple: Dear Blah Blah, Thank you for the Blah, I love it.  Love, Haley), this stage was pulling teeth; we did only about three at a time - makes me wish we'd only had 6 people to the party.  We're still working the system out, but the first five years I've got down.  Year six I'm hoping that I can give her a list of adjectives and she can just figure it out.  Another thing I'm thankful for?  They don't whine about this process (dude, knock on some wood for me).  They seem to enjoy writing the notes.  With Kale, I started with just five of them.  Usually getting this kid to sit down with a writing utensil for any period of time can get a little painful on my part - can't he just knock them off the table onto a pile of markers and hope something rubs off? Then for the next few I asked if he wanted to do this one for a specific friend - he was so excited that we got through all 15 of them in one sitting.  Thank goodness.  Now it's up to me to address them and (ugh!) hunt down some stamps.  Remember the days when your mom had a whole book of them in her purse all the time because that's how you paid bills?  Barely.  I do remember that one of my bridesmaid's parents gave us a roll of stamps as a wedding present - awesome!  I didn't have to hunt any down for thank you cards.

This is what I'm talking about